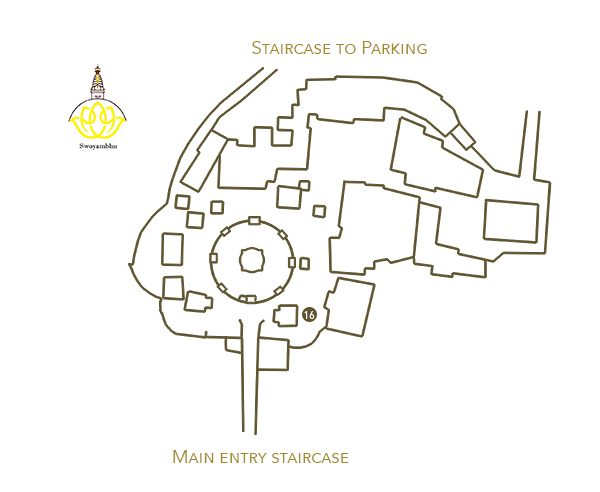 In front of the karmaraja monastery, to the east of Nagapura there is a small east facing shrine in the Gandhakuti style. Inside the shrine is a stone image of Pavana Bhairava in the blissful posture (sukhasana) with his consort. It’s believed that shrine was established by king Pratapa Malla in N.S.773, same year of Pratapapura shrine also established.

There is some folklore associated with this Bhairava. It is thought that if someone disrepecte him, he might cause famine and disaster, unleashing terrifying thunder in the clear skies. But if someone confesses their sins and worships him with due respect, then he could immediately cause rainfall and thunder storms. That is why when rainmaking (megha sadhand) is performed at Shantipura, a similar puja is offered at this place, too. The image of Pavana Bhairava deity is described as follows; He has one face and four arms, resting in the sattva paryanka asana. He is terrific in appearance, bedecked with ornaments of serpents, wears a garland of severed heads, and rides upon a corpse. He has three eyes, his first pair of hand holds a chopper (vajrakartri) and skull, whereas his second set of hands holds a trident and skull- staff. His consort, having one face and two hands, sits on his lap in the playful (lalitasana) pose. She embraces him with her right hand, gazing at him holding a banner (pata) with a wind banner. The deity’s halo is engraved with many ornate patterns of flame and fire.