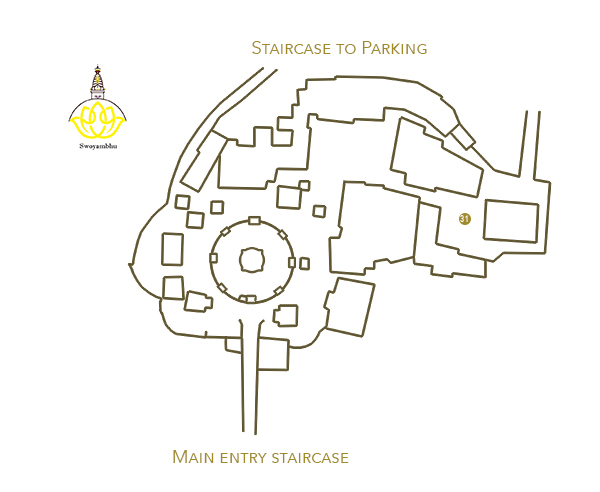 The colossal Buddha statue installed in front of Shantipur dated back to the 16th century. This Stautue posture seated in vajrasana on a lotus throne, on a lion seat, displaying the earth- touching gesture. The image is installed facing east.

Of all the seated Buddha images in the Swoyambhu region, this is the largest. We do not know by whom or when this image was established. On the statue’s lion throne, there is an inscription which mentions that the image was reinstalled and renovated by three donors, namely Prasasin, Hala Maharatna and Kularatna Tamrakar from Maru Ilachen on Marga 7th, B.S.1990.

The image is flanked by images of Saariputra and Mahamaudgalyayana, his chief disciples, who hold a staff and alms bowl. Although this colossal Buddha image is called Aksobhya. it is actually not a representation of Aksobhya, but rather Buddha Shakyamuni, in part . Because the throne incorporates images is a lion rather than an elephant.