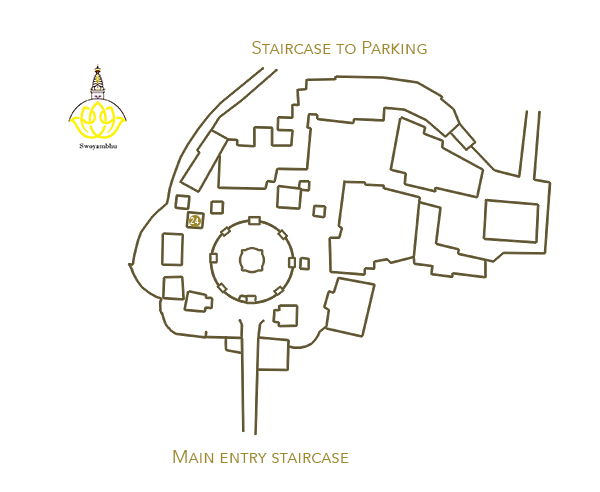 This chaitya is situated between the main stupa and Vayupura shrine at the southwest corner of the Swoyambhu stupa. It is an unique chaitya among we found in the swoyambhu. The base below the dome of the chaitya has five tiers with six rows of 30 different gods and symbols doors and in dome there is four Tathagatas Buddha, of totaling 124 in all four directions. Because of the chaitya having a number of doors with auspicious symbols, it’s known as Bahu Mangal Dwara Chaitya. In Tibetan, it’s called as a Tashi Gormang Chorten (Auspicious Chaitya with Many Doors).

Dates of this chaitya is very hard to determined, but we can know that chaitya is older because in 1857, Hodgson wrote a short essay from his Darjeeling cottage. Titled “Architectural Illustrations of Buddhism” and supplemented by a set of line drawings, the essay was only published in 2005 (Hodgson

2005 [1857]). It is labelled as “A small Kutagar Chaitya at Gōpūcch”. Gopucchagiri, or Mount Cow-Tail, is one of the names given to the Swoyambhu hillock in the mythical narrative of its creation.

In Hem Raj Shakya books ‘Sir Svayambhu Mahachaitya ‘, its writes that chaitya 120 gods or doors are represented as steps and hand gestures use in performing tantric dances chariya. We can also find Chaturmaharaj in the central openings of the lowest level with Bhairava and Bodhisattvas side by side in the secondary openings.

This chaitya was completely collapse on 25 April 2015 earthquake which has made various artefacts in the chaityas become scattered in the rubbles (clay and stone sculptures, jewelleries, coins, etc.). It was immediately taken to safety Swoyambhu Buddhacharya priest places the artifacts found in the chaitya to safe place, for safekeeping.

It’s now had been rebuilded by the monetary help from UNESCO, Department of Archaeological of Nepal, Local Buddhacharya community involvement and members of FMSC (Federation of Swayambhu Management & Conservation) and devotees Mohan Shakya, Samyak Ratna Shakya and Bharat Suwal who help by donating money for gold plating the pinnacle of the chaitya.